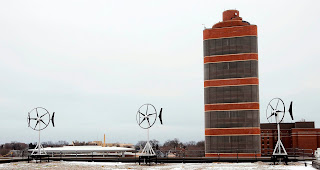 Solar panels on office buildings and homes have become almost commonplace. But windmills?

That is what SC Johnson is doing at its corporate headquarters in Racine, Wisconsin. The company has launched a wind energy pilot program with the installation of three new wind turbines. The objectives are to reduce greenhouse gas (GHG) emissions and raise awareness that renewable energy is not just for factories, but also office buildings in urban settings.

The three wind turbines are located on the roof of one of the seven buildings on SC Johnson's international headquarters campus, which has an approximate eight block radius and where more than 1,300 employees work. The wind turbines are expected to be fully functioning by the end of the month. Once fully operational, the turbines will be connected to the company's electrical distribution system. The output they generate will power a small portion of the company's campus.

Admittedly, this is a test project and it is difficult to project how many computers, machines and other basic office resources can be powered by renewable energy. "While we are not sure how much alternative energy these turbines will produce, we expect to have clear, consistent results within a year," said Johnson. "This pilot program will help provide useful information on ways we can develop more sustainable solutions for our campus."

The turbines are expected to be fully installed and connected in late January and will be monitored closely throughout the year. Depending on the impact of the turbine's energy output, it is possible the company will extend the project to additional local SC Johnson facilities.

This is not SC Johnson's first foray into sustainable energy. Its largest global factory, based in Racine, Wisconsin, is partially powered with cogeneration using methane gas from a local public landfill. The company's Bay City, Michigan plant is powered with wind energy, reducing the annual purchase of coal-fired electricity by nearly half. In Indonesia, waste palm shells are burned as a substitute for fuel, using 80 percent less diesel fuel, and in Mijdrecht, The Netherlands, the company's largest European manufacturing facility is operated by an 80 meter-tall wind turbine which is expected to eliminate 3,900 tons of carbon dioxide annually.

Through these efforts, approximately 36 percent of SC Johnson's total electricity usage worldwide came from renewable energy. The company cut GHG emissions at its worldwide factories by 27 percent during the last eight years, including all its United States operations by 17 percent since 2005. These reductions -- achieved three full years ahead of the company's 2011 target -- are the equivalent of taking approximately 11,100 U.S. cars off the road for one year.

nice..
Did you happen to see the program "living with Ed" last night? may of been a rerun, but Ed got a new wind turbine for his home and went to show it to Jay Leno. Jay was gloating he just got a turbine but it was three times the size and est output.... funny!
Thanks for your submital to Global Sustainability. :)