Is Big Oil Too Big to Fail? 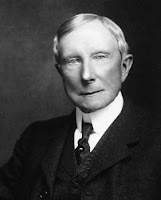 According to the Financial Times, the oil industry is warning that the Obama Administration "risks derailing projects worth $7.6 billion in government revenue" if it imposes new safety requirements on offshore drilling.

Didn't we just go through this with the financial industry? Lax regulations and enforcement led to reckless behavior by financial institutions, resulting in an economic disaster. Fearing that a failure of financial institutions would cause more devastating harm to the economy, our government rescued them with a multi-billion dollar bailout.

Now the oil industry has come up with its own "too big to fail" type of argument. When our President proposes new safety regulations, the oil industry responds that they are too important to our economy. We cannot increase their costs with new safety regulations, they say, because that will decrease government revenues and increase energy prices. And that will reduce our ability to compete in the global economy because oil is essential to everything we produce.

What should President Obama do? As several readers of this blog have pointed out, President Obama ranks with Teddy Roosevelt and Jimmy Carter as one of the most pro-environment Presidents in history. I agree. But those two prior Presidents had very different approaches to solutions. Our current President would be well-advised to consider those differences and choose between them.

What was the lasting effect? Subsequent Presidents starting with Reagan and continuing through two Bushes relaxed the regulations and dismantled the synfuels corporation. Thirty-five years after the first oil crisis that inspired President Carter to act, we find ourselves even more dependent on oil and in the midst of an even greater crisis.

Now let's consider the approach of Teddy Roosevelt. President Roosevelt did spend a good deal of government money on the environment, most notably buying up land and establishing the national parks system. That investment has endured for more than a century. He also addressed the lack of competition in energy markets by commencing antitrust suits against Big Oil, ultimately resulting in the breakup of the Standard Oil Company.

President Roosevelt recognized that the lack of competition in the oil industry was causing fundamental problems in our energy markets and beyond. By breaking up Standard Oil into separate companies, his antitrust suits completely restructured energy markets across the country and throughout the world. The competition between oil companies that ensued promoted innovations and investments in new technologies that ultimately helped the US oil industry become a world leader. It also resulted in more efficiency and better prices for consumers.

The question presented to President Obama is not whether he will follow in the tradition of Presidents Teddy Roosevelt and Jimmy Carter. The question is whether he will choose between them. Will he follow the lead of President Carter and concentrate his efforts on regulations and government spending on specific technologies with possible short-term benefits but no long-term restructuring of our energy markets? Or will he follow the lead of President Teddy Roosevelt and focus his efforts on structural changes that will force oil to compete with alternative energy over the long term?

The first step is to identify the structural problem in our energy markets. Reagan advisor and Nobel Laureate Milton Friedman noted that oil has an artificially low price because the price does not include the cost of cleaning up the particulates, carbon and other forms of pollution that are emitted when oil is burned. We would not think a trash hauling company was giving us a good price if it cut its costs by dumping the trash in our public parks; nor should we think that oil is giving us a good price when it is dumping dangerous emissions into the air that we breathe.

The artificially low price distorts the market and deters innovation and competition. Alternative energy sources and technologies cannot compete because their main advantage -- less or no pollution -- is not reflected in energy prices.

By forcing the price of oil to include the cost of pollution we would see three immediate benefits. First, we would become more efficient in our use of energy. That efficiency alone could offset all or part of any increase in oil prices. Second, we would see increasing private investments in alternative energy technologies that were not burdened by the cost of pollution. Third, the oil companies would be forced to moderate price increases for fear that businesses and consumers would switch to alternatives in response to price increases. Over the longer-term, increased competition between oil and alternative energy sources would encourage continuous innovation and efficiencies to stay competitive.

We are in the current mess because oil has become too important to our economy. The only solution that will produce sustainable results is one that ensures a less important role for oil in our economy. Safety regulations and government-directed investments will not accomplish that objective. We need a game-changing restructuring of energy markets to inject more competition between different sources of energy.

I hear those who say that cap-and-trade or carbon taxes will never fly because the American people want cheap energy today and are not willing to go through the disruptions and higher prices that would occur in the near term. That is why timing is so critical. The sense of disgust and despair over our inability to contain the BP Deepwater Horizon catastrophe invites bold leadership. President Obama should seize the moment to push for fundamental changes in energy markets while he can.

eToro is the ultimate forex broker for beginner and advanced traders.