Oil Disasters and Sub-Prime Mortgages: When Risk is Taken Out of the Price 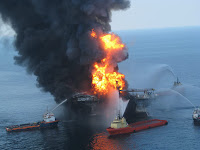 The BP Deepwater Horizon catastrophe has much in common with the implosion of the sub-prime mortgage market. In both instances, very intelligent people failed to take basic precautions with risky investments. Why? Because the risks were not fully included in the investment analysis.

In the sub-prime mortgage market, the rating agencies gave what turned out to be deceptively favorable ratings to Collateralized Mortgage Obligations (CMOs), in part because the risks were chopped up and spread around in pools. Investors did not demand a high risk premium because they could not see the full extent of the risks.

Something very similar happened with BP's investment in the Deepwater Horizon. BP's spill response plan estimated the worst case scenario at 177,400 barrels of oil, a number that we now know was absurdly low. And the bulk of the risk was assumed by the US government when it limited BP's liability for damages claims to $75 million.

If BP had to assume the full risk (potentially billions of dollars) in a gulf that has seen some of the worst hurricanes (including Katrina), the insurance premiums or reserves required to cover that risk presumably would have been much larger. Larger insurance premiums or reserves would have reduced the potential return on investment for the project.

Here's the bottom line: Our best hope for a future of clean and sustainable energy is to encourage rational investments by the private sector. That is only possible if the price of oil includes the full cost of pollution and the full cost of insuring against environmental disasters. Once that happens, alternative energy sources that do not carry those costs will become very attractive investments and the smart money will flock to them. So if you want to start a shift to cleaner and more sustainable energy sources, the first step is to stop subsidizing oil with free liability insurance courtesy of the US Government.